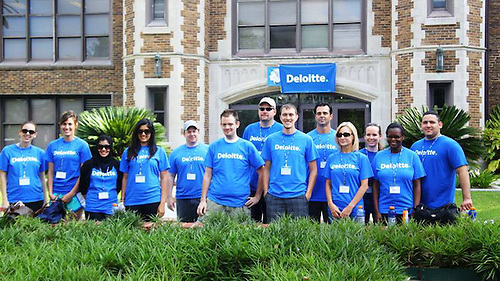 Class may be out for the summer, but three Houston ISD schools kept their doors open on Friday, June 7, 2013, as roughly 300 Deloitte employees poured in to beautify the campuses as part of the company’s annual ‘Impact Day’ service project. The Deloitte volunteers divided themselves between Wharton Elementary, Hamilton Middle, and Reagan High School and spent the day providing both aesthetic and functional improvements to the schools.

“Houston is a big community that has given so much to Deloitte, so I think it’s important that we give back,” said Dan Martin, a principal at Deloitte who was volunteering that day. “I’ve been with several companies in the past and I’ve never seen anything like this. It makes me proud and I’m glad to be here.”

Organizing 300 volunteers between three different schools is no small task, but it all came in stride as a part of the volunteer day, a long-standing annual tradition where the company sends thousands of its employees out across the country to spend a day giving back to local communities.

“It’s wonderful that they’re doing this for the school,” said Wendy Hampton, newly appointed principal at Hamilton Middle School. “Because our students spend eight to twelve hours a day here, depending on which electives they choose to take. And when a student is going to devote that much of their time here, it’s vital that we’re able to provide them a nice environment in which to stay.”
When the fall 2013 school year begins, roughly 4000 students will return to the three changed schools to experience the benefits provided by the Deloitte volunteers.

“There’s nothing bigger that I can say than ‘thank you,’” continued Hampton. “I’m just filled with gratitude. Because when you look at the amount of combined time and work that 300 people can contribute, and you see just how amazing the improvements that they make are, you realize that we’re accomplishing something here with these volunteers that we could never do without them.”