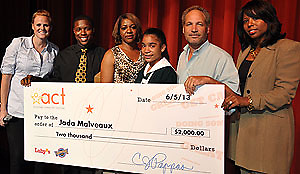 Making good decisions in one’s day-to-day life generally does not elicit public accolades or financial rewards, but for one HISD middle-school student, a willingness to help others and withstand peer pressure has brought her both the applause of her teacher and a prize package worth about $3,500.

Jada Malveaux, a seventh-grader at the E-STEM Academy, was one of dozens of students to be nominated throughout the 2012–2013 school year for recognition through Luby’s Inc.’s ACT Program (Achieving Character Together), which was introduced in September 2008 and designed to promote and reward outstanding character achievement in middle-schools students.

Teachers and staff nominate deserving students every six weeks by giving them a “You’ve Been Caught Doing Something Great!” ticket, and one “bronze” winner is chosen at each school per six-week period. A “silver” winner is subsequently selected from among the bronze winners as an overall winner for each six-week period, and finally, a “gold” winner is chosen from among the silver winners at the end of the school year and pronounced the grand-prize winner.

Jada was selected for the top prize because she “will stand up for what is right, even if it is not the popular decision among her peers,” explained teacher Joshua Wiley. “On several occasions, she has also volunteered to stay after school and help out other students with their studies because she knows that being an outstanding person means going the extra mile. And without even being asked, she assists a special needs student at school by helping with notes, or making sure she has the homework assignment written down.”

As the grand-prize winner, Jada received a $2,000 scholarship, a new laptop computer, and free meals at Luby’s for a year (an $800 value) during a special ceremony held on June 5.