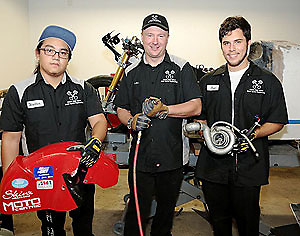 While many recent high-school graduates are planning trips to the beach, enjoying their newfound freedom, or sleeping late, members of Chávez High School’s Class of 2013 Eric Lopez and Walter Campos are going full throttle this summer—literally.

These young men were part of the Motor Sports Engineering program launched this school year by science teacher Greg Ditch, in which students turned an ordinary Pontiac GTO into a fully-fledged land speed race car that was piloted by NASCAR Nationwide Series driver Donnie Neuenberger.

While turning wrenches and hanging out with a professional race car driver might have been enough for many 17- and 18-year-olds, this was just the start for Lopez and Campos. In August, they will attempt to become part of history themselves by working with a world champion race team at the Bonneville Salt Flats in Utah.

At the close of the school year, Ditch was contacted by Al Lamb of APL Racing in Dallas, Texas. Lamb is not just some run-of-the-mill racer; he has been racing cars and motorcycles for 40 years and has multiple wins to his credit, including a world record in land speed racing set in 2012.

“I saw first-hand what the engineering students from Chávez could do and I loved the GTO project they built this year,” said Lamb. “I really want kids like Eric and Walter to feel challenged and reach their potential.”

The students have already helped fabricate a fiberglass body that will be tested by aerospace students at Wichita State University. They will also participate in a test session in late July, when the team’s engineer will simulate high speed runs using a sophisticated computer system.

Thanks to Lamb’s generosity and his successful organization, these Chávez graduates will have the chance to travel to Bonneville, showcase what they learned as HISD students, and hopefully become world champions.

Afterwards, Lopez is headed off to the University of Texas at Austin to study engineering, while Campos will accept either a full-ride scholarship to Pit Crew U (the premier NASCAR training school) in Mooresville, North Carolina, or attend The School of Automotive Machinists. Both plan to pursue careers in the competitive world of motor sports.