It was a whirlwind tour of several high school campuses, as Interim Superintendent Dr. Grenita Lathan surprised seniors with the Superintendent Scholars Awards.

This was the third year of the awards, which were underwritten by Coca-Cola Southwest Beverages and the Houston ISD Foundation. Handpicked by Lathan, the 11 students were selected from HISD seniors nominated by their principals or leadership teams.

END_OF_DOCUMENT_TOKEN_TO_BE_REPLACED

Luis Landa has been selected as the new principal at Chavez High School. Landa has spent his educational career at HISD, where he has served as a science teacher at McReynolds Middle School, a teacher specialist at Henry Middle School, assistant principal at Austin High School, and most recently principal at Sutton Elementary School. While serving at Sutton Elementary, Landa was responsible in the campus being consistently ranked in the top quarter of all schools in the district and state. Sutton was also recognized numerous times as a Gold Ribbon School by Children at Risk during his tenure. He holds a bachelor’s in Biology from University of Texas at San Antonio, a master’s in Curriculum and Instruction from University of St. Thomas, and a doctorate in Educational Leadership from University of Houston. 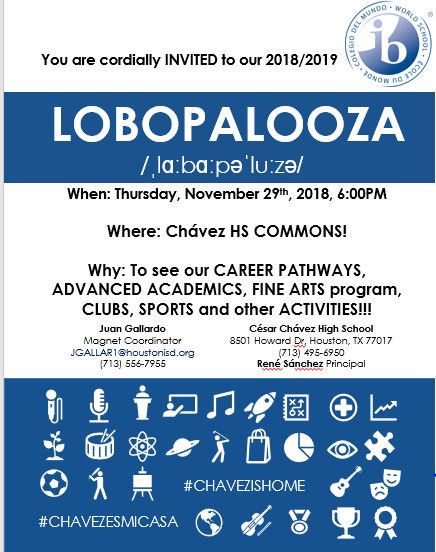 Chavez High School on Thursday will hold its annual Lobopallooza magnet program showcase event for prospective students and their parents.

The event, which will run from 6 to 7:30 p.m. at the campus (8501 Howard Dr., 77017), coincides with the Houston Independent School District’s approaching deadline on Dec. 7 for the first round of 2019-2020 magnet school applications. Lobopalooza is an open-house event for prospective students that highlights the programs and activities that will be offered at Chavez during the 2019-2020 school year. END_OF_DOCUMENT_TOKEN_TO_BE_REPLACED 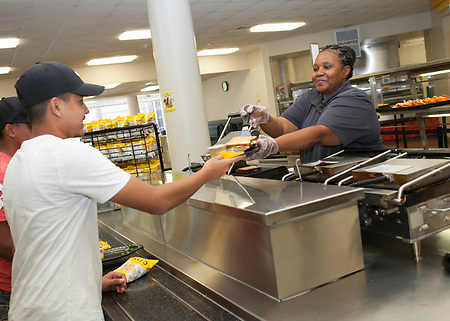 Marylyn Williams wants students who visit the cafeteria at Chavez High School to experience more than just food. She wants them to feel welcomed and at home.

As the campus cafe manager, Williams believes she is responsible not only for serving appetizing meals but also for creating an environment that influences students for the better. Each day, she said, she makes it a point to greet every student with a smile, show them respect, and offer a listening ear.

“Treat others as you would like them to treat you,” Williams said. “If you say good morning and thank you to the students, they will eventually say those same things back to you.” END_OF_DOCUMENT_TOKEN_TO_BE_REPLACED

“We got some really good food, and I wish I could grab seconds,” said Chavez senior Corinthia West regarding the recent Spring Cookout at her school. “I think the whole school came out, and we all enjoyed each other. This is fun!” END_OF_DOCUMENT_TOKEN_TO_BE_REPLACED

The Chavez Chess Academy, under the direction of instructor and coach Robert L. Myers, has been busy. In a couple of weeks, the team will travel to compete in Tokyo, and in June, they are headed for Greece and Italy.

The team has won five state chess championships in a row, and team member Anateresa Hipolito is now rated one of the top 100 girls in America. Consequently, the students were recognized by Houston Mayor Sylvester Turner and Governor Gregg Abbott.

Last summer they competed and won in London, Paris, and Rome and were featured twice on the cover of “Texas Knights,” the official publication of the Texas Chess Association.

Schools in the Chavez High School feeder pattern hosted a fine arts showcase, “A Feast of Art,” on Saturday, May 20 at Chavez High School to celebrate artistic successes achieved by students in District III during the 2016-2017 school year. 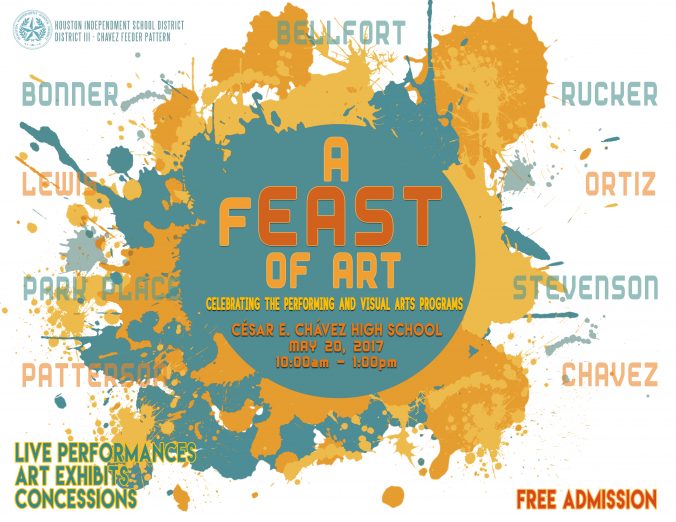 Schools in the Chavez High School feeder pattern will host the first fine arts showcase, “A Feast of Art,” from 10 a.m. to 1 p.m. on Saturday, May 20 at Chavez High School (8501 Howard, Houston, 77017) as part of a larger effort to increase arts access in the area.

Students from Chavez and other area high schools also participated in the seminars, which reached more than 300 students over four days.

END_OF_DOCUMENT_TOKEN_TO_BE_REPLACED

Chavez High School and Lanier Middle School won the top prizes in Vocabulary.com’s 2015-2016 national Vocabulary Bowl, a competition that is becoming just one example of effective strategies to increase literacy across the HISD’s secondary schools.

Chavez won for the second consecutive year with 344,043 words mastered, and Lanier won with 230,034 words. Chavez celebrated on Monday, May 9, with a trophy presentation, medals and certificates for the top 100 students, and inspirational speeches and congratulations from local media and nationally known figures. Lanier’s celebration was Friday, May 13, in the school gymnasium.