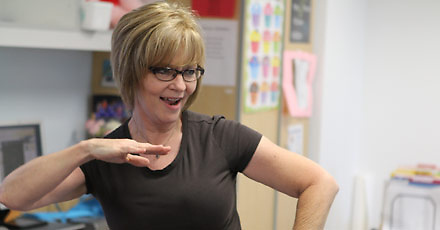 Rhonda Goldmann of Lovett Elementary does the "Division Dance" with her students as part of her summer school math instruction.

Those traveling in Europe a little more than three years ago may have bad memories of an Icelandic volcano causing them to be stuck in airports waiting for volcanic ash to clear the skies, but Lovett Elementary School science teacher Rhonda Goldmann has some hope for a repeat performance later this summer.

Goldmann will travel to Iceland to observe active volcanoes in the hopes of learning more about their positive and negative effects to bring back new lessons for students.

Her trip is being paid for with a grant from the Fund for Teachers, a program started in 2001 by retired Apache Corporation founder Raymond Plank to provide educators with meaningful professional development opportunities of their own design. The application process starts each October and ends in January. Goldmann is among 11 HISD teachers who won grants from the program this year. The other grant-winners from HISD are:

Goldmann said she thinks she’ll bring back many potential lessons to her students, including ones about energy and force, as well as soil and land enrichment.

“If I could see an eruption, that would be amazing,” she said.

This grant is the second one Goldmann has been awarded. Three years ago, she traveled to Ecuador on a grant to learn about rainforests and work side-by-side with other scientists.

“The most inspiring, amazing thing I’ve ever done is to be able to go on one of these trips,” she said. “It gave me first-hand experience. I showed my students photography and wrote lessons from it. I showed them how scientists work in the rainforest. I was able to inspire my students.”

Goldmann got her start in teaching years ago, doing her student teaching with a first-grade class at Lovett before leaving for Germany and eventually returning a few years ago. Prior to that, she worked as a math and science coordinator, and Lovett was one of her campuses.

“I hope I retire here,” she said. “That would be a nice end to my career.”