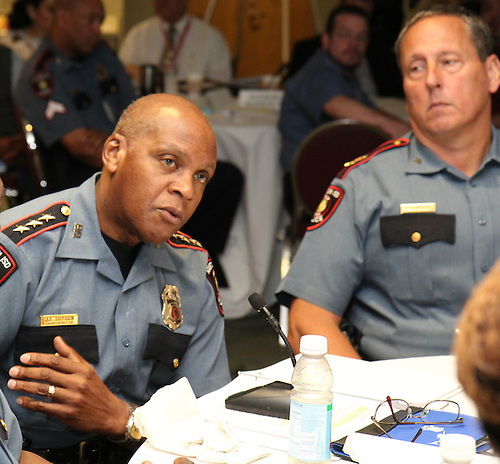 The Houston area hasn’t been affected by a tropical storm yet this year, but HISD administrators are already fine-tuning their preparations in case one does hit the Texas coast.

Members of the Hurricane Emergency Response Committee gathered at the district’s headquarters on June 27 to take part in a tabletop preparedness exercise. The exercise was designed to let them review their current plans of action and to identify ways of improving them based on lessons learned from previous storms.

“This community is depending on us to provide information when storms are threatening,” said Risk Management Insurance Manager (and exercise moderator) Peggy Roberts. “We can’t prevent the storms, but we can prepare as best we can to get the district up and running again as quickly as possible.”

Pre-storm preparations vary by department, but many already have effective strategies in place. Warehouse Operations, for instance, plans to move packs of supplies earmarked for the district’s 12 refuges of last resort to the front of its warehouses for easy access after a storm makes landfall. Transportation Services, meanwhile, will arrange its bus fleet in a “storm formation” to minimize damage to the vehicles.

“What we do is identify a secure location, such as a stadium parking lot, and determine which side would get the least exposure to wind,” said Senior Manager of Fleet Operations Mark Swackhamer. “Then we park the newer buses in the middle and the older buses on the outside.”

Throughout the exercise, moderator Peggy Roberts reminded everyone of the value of low-tech solutions. “It’s great to have a copy of something on your C: drive,” she said, “but it’s also good to have a paper copy. I keep my manuals in plastic sheet protectors, because I expect to be using them in wet conditions, and I also keep one in the trunk of my car. Also, print any forms you think you might need now, so you’ll have a good supply later. You probably won’t be able to access them electronically right away.”

Media Relations General Manager Jason Spencer said that his staff was currently working on a flyer for parents containing details on how to receive hurricane-related updates on school closures and other related topics after a storm makes landfall.

“We plan to take the shot-gun approach to communication,” said Spencer. “We will use social media, but we know that not everyone tweets or uses Facebook, so we’re going to use every tool at our disposal to get the information out.”