Nearly a century ago, famed educator John Dewey said, “If we teach today’s students as we taught yesterday’s, we rob them of tomorrow.” Dewey’s words of wisdom resonated among 150 HISD school leaders, central office staff members, and teachers as they gathered this month for a four-day retreat to officially launch and learn more about PowerUp, HISD’s groundbreaking initiative that will eventually give every high school student a laptop computer.

Principals and teachers involved in phase 1, or the pilot phase of PowerUp, along with members of curriculum, professional development, and instructional technology, met July 15-18 at Sharpstown High School to train with over a dozen educators from the Mooresville Graded School District located in Mooresville, N.C. MGSD has received national recognition for undertaking a digital technology initiative that provides every student in grades 4-12 with a computer to use at school and at home.

“Listening and hearing from educators who have successfully launched a similar program has made me even more excited about PowerUp,” said Bellaire High School Principal Mike McDonough. “To get their input and advice as well as hear how it has transformed teaching and learning in their school district makes this huge initiative a little less intimidating.”

After researching and studying best practices from around the country, HISD chose to model PowerUp after Mooresville’s program. Since it began six years ago, the North Carolina school district has seen dramatic gains in student achievement, attendance, and graduation rates.

“We are honored to help HISD launch this initiative and share the lessons we learned while implementing our program,” said MGSD Chief Technology Officer Scott Smith. “One of the things we discovered early on is how extremely important it is that that everyone is on the same page and is moving in the same direction.”

Smith and over a dozen MGSD administrators, teachers, and principals shared these and other insights with central office leaders and the 11 principals whose schools are involved in phase 1 of PowerUp. Each principal was also asked to bring a group of teachers from their campus to learn more about the initiative and its implementation this coming school year.

“It’s a lot of work, but the kids are the reason we do and it is the reason why HISD is doing it,” said MGSD Director of Accountability and Student Information Ginger Huffstickler. “I love the fact that HISD is calling the initiative PowerUp because previously school districts like HISD have made students power down their digital devices at school – but now students will be empowered by technology.” 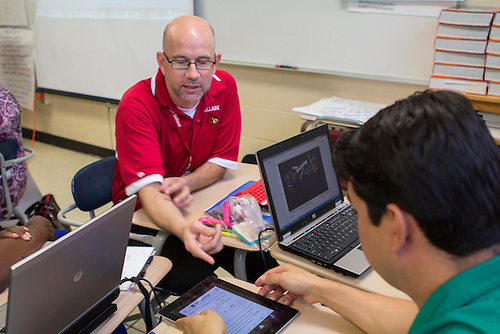 Various departments throughout HISD have been involved in the planning and development of PowerUp and will continue to be involved as the plan is implemented. Teachers at the 11 pilot schools will receive their computers in August and have an entire semester of training before students get their laptops in January of 2014.

“Collaborating with the central office, with Mooresville, and with the other principals involved in PowerUp has been extremely beneficial for me and my staff,” said Austin High School Principal Jorge Arredondo. “We now have a better vision of what it is going to take to make this initiative a success at and we are ready and excited to get started.”