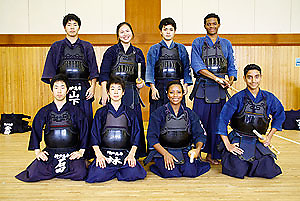 A dozen students from Westside High School did their part to improve international relations this summer when they participated in a program sponsored by the Japanese Ministry of Foreign Affairs.

The students spent ten days exploring that island nation in July through the Kakehashi Project/Bridge for Tomorrow, a program designed to cultivate a more positive relationship between the U.S. and Japan through youth cultural exchange.

While there, Westside students stayed with host families and learned the Japanese arts of fencing (kendo), archery (kyudo), paper folding (origami), and the tea ceremony (chanoyu). They also visited the Kobe City College of Technology, where they experimented with liquid nitrogen, discussed a solar car with the students who built it, and even took part in a hovercraft riding trial.

All of the Westside students described the trip as a once-in-a-lifetime experience. 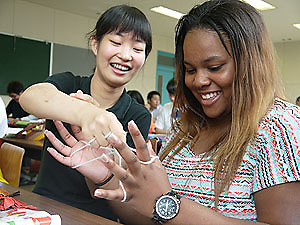 Senior Kaylynn Davis (right) experiments with string art during a class on origami, the Japanese art of paper folding.

“There is nothing like being welcomed by complete strangers with open arms and kind hearts,” said junior Erica Draud. “The home stay was by far the most incredible experience. Not only was my family incredibly generous, they also showed me the sights around Kobe and what it’s like to live in Japan. From the music box museum to the star festival, every moment was precious, and I will never forget it.”

“The trip allowed me to make long-lasting connections with the people I met,” said senior Idara Ukpanah. “I hope to visit Japan again and strengthen the bond. I am so glad that I was chosen to go.”