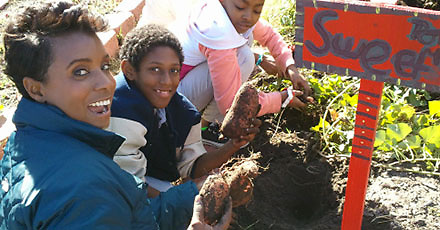 Kellie Karavias, a culinary arts teacher and garden educator at Gregory-Lincoln Education Center, who teachers her students how to grow, harvest and cook healthy foods,  has been highlighted as a Food Revolution Hero on Chef Jamie Oliver’s Food Revolution website. “Food Heroes” are people across the country who combine their passion for food with innovative ways to promote fresh, healthy foods in their communities.

“One out of three kids is obese, because they are living on chips and fast food,” Karavias said. “If they make a big enough garden, they can feed their entire family.” Her culinary program begins with the organic school garden, where science, math, nutrition, reading, and physical activity are integrated into lesson plans. It continues in the “culinary classroom,” where students produce nutritious meals in a safe, kid-friendly environment. The students also market and sell their produce to Whole Kids Farmers Markets at Whole Foods Market—Montrose.

Karavias got a call from the Food Revolution team in summer 2012 asking her to work with them to push edible education in schools around the country. Over the years, Karavias has had visits and publicity from Chef Alice Waters, ABC News Now, and the Cooking Channel’s From the Kitchen of Hidden Valley.

Her website and blog, Pitchforks, Plates & Pencils, features information about her program at Gregory-Lincoln. Prior to that, she was teaching at Rodriguez and Tinsley elementary schools.

When Karavias was at Rodriguez ES, she set up a schoolwide body-mass-index study to measure each child. When the results revealed that 40 percent of students were obese, she met with Texas Children’s Hospital, set up community partnerships, organized a school garden, and helped create a culture of health and wellness that included parent cooking classes.

Karavias was asked to expand her vision to Tinsley ES, where she won a three-year, $45,000 Urban Harvest Youth Education grant to set up an organic garden and incorporate culinary arts into the fine-arts curriculum. The program served as a national model in “Love Your Veggies,” a program sponsored by Hidden Valley Ranch, which awarded her a $20,000 grant.