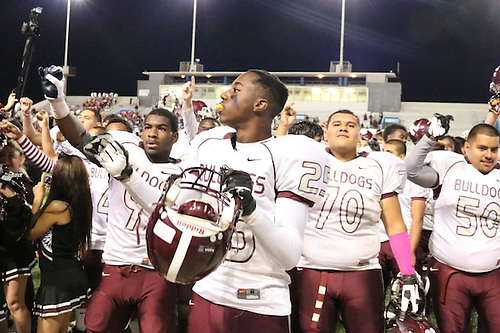 The Reagan Bulldogs celebrate their first district title in 54 years Nov. 2 at Delmar-Tusa Stadium. They’ll launch their playoff bid there next week against either Tomball or Tomball Memorial High School. (Photo by Michael Sudhalter/The Leader News)

The last time the Reagan High School Bulldogs won a football title, gas was 25 cents a gallon, Dwight D. Eisenhower was president, and the U.S. had just named its first crop of potential astronauts.

The year was 1959, and 2013 will go down in Reagan history with the same milestone, as the Reagan varsity squad notched its first district championship in 54 years Nov. 2 in a hard fought homecoming battle with rival Waltrip High School at Delmar-Tusa Stadium.

The game ended with Reagan holding on to a 28-14 victory, with a perfect district season record of 7-0, and with Coach Stephen Dixon drenched in celebratory Gatorade.

Calling the season “an awesome year for the Bulldogs,” HISD Athletic Director Marmion Dambrino said the team’s successes have energized both alumni and the campus community. “The school spirit is at an all time high, the band has improved their participation numbers, and the Red Coats (drill team) and student body are full of that Reagan Bulldog Pride,” she said.

Dambrino said the turnaround “did not happen overnight” and credited fourth-year coach Dixon, his staff, and players with spending “countless hours over the years continually improving the program at Reagan, and now that is paying off.”

There’s a Dixon on the winning roster, too – son Stephen, Jr. is a wide receiver. “Having him here during the best years Reagan has had since the ‘50s feels great,” said the elder Dixon. “Having him with me during a district title-winning year feels even better.”

In another historic touch, the coach of that 1959 Reagan title team was the legendary Joe Tusa, for whom Delmar Stadium was renamed last year – and who serves as mentor to Coach Dixon.

Reagan will seek to preserve its undefeated status Friday as the Bulldogs face Davis High School – who upset them last season—at 7 p.m. at Delmar-Tusa. Then it’s onto the playoffs next week, where they’ll return to the stadium to face either Tomball or Tomball Memorial in the first round of UIL 4A Division I playoffs.