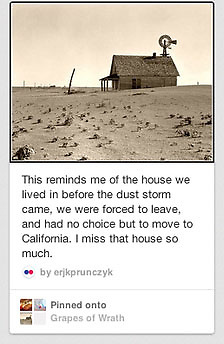 Don’t look now, but Tom Joad is on Twitter, and Adam Trask has a webpage. If those two names seem vaguely familiar to you, it’s probably because they are characters in a pair of American literature classics written by John Steinbeck. Joad is the protagonist in The Grapes of Wrath, and Trask is a wealthy Salinas Valley ranch owner in East of Eden.

“As sophomores, they work as a group to develop a website based on their summer reading choice that shows their developing grasp of rhetoric,” explained Ellis, a second-year teacher. “They must choose an issue from the book, and advocate for some aspect of it using political cartoons, Twitter, photo essays, interviews, musical playlists, and Pinterest pages ‘sponsored’ by one of the book’s characters. The kids have about 20 options and must choose six that represent three different categories.”

The links above are from character-based websites exploring the topics of homelessness and free will (or “choice”). Ellis’s students also created Pinterest pages here and here in the voice of another character, Ma Joad, to explore the subjects of immigration, homelessness, and minimum wage.

This project is just one example of the innovative instructional strategies taking place in classrooms all across the district. You can learn more about HISD’s efforts to incorporate technology into its curriculum here.