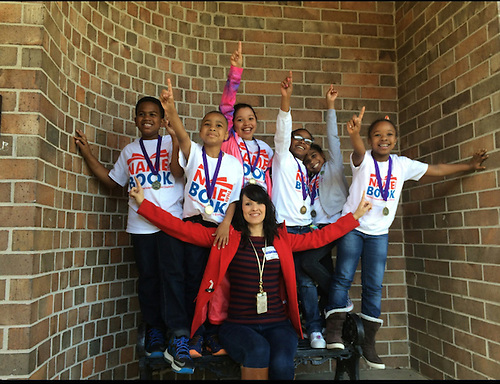 “They not only scored a perfect score, but they were also very gracious sports and made sure to congratulate their competitors and other sponsors with hugs and high fives,” said Garza, the “Name That Book” sponsor for Lockhart.

This year’s K-2 “Name That Book” competition required that participating students read 29 books from a pre-selected list. The list includes classic literature as well as contemporary award-winning books representing a variety of genres. Garza’s students read all the books but were only responsible for knowing the content of five or six that each one selected.

The competition consisted of five rounds with five questions or lines in each round. Teams listened to a line read aloud by the competition’s moderator and then discussed, deliberated, and collectively decided which book the line was from.

Lines from this year’s competition included “He hopped faster;” “This time, everyone believed that she would;” and “She thought about food.” The lines contain no character names or specific clues to help identify the story, so students must memorize all the lines in each book. Lockhart students were able to identify the correct book for every question in all five rounds and won first place with a perfect score of 25.