Vince Hamilton, a teacher at Young Men’s College Preparatory Academy, got a big surprise on Thursday – the Southeastern Consortium of Minorities in Engineering named him Teacher of the Year! 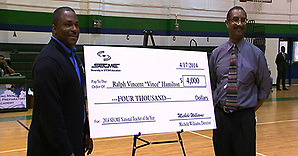 “I told him he needed to have a meeting with me about some issue with a parent and he needed to get down here right now,” Principal Dameion Crook said. “What he didn’t know was 400 kids and his family and friends had assembled in the gymnasium. When we brought him in, he was extremely surprised.”

Hamilton teaches robotics at the school. He has taken students to the SECME national tournament for the past three years.

“Mr. Hamilton has created a program that allows students to experience a challenging curriculum and evokes thought, problem solving, creativity and confidence,” Crook said. “Mr. Hamilton is an incredible asset to Young Men’s Prep. He’s the reason why we have an incredible nationally and world-recognized robotics program.”

Hamilton said his students’ dedication and thirst for knowledge drive the program’s success.

“What they learn in math and science is translated into hands-on projects in their robotics class,” Hamilton said.

Hamilton was awarded a $4,000 check for being named SECME Teacher of the Year.

“It’s a complete surprise,” he said. “I have to figure out what to do with it.”