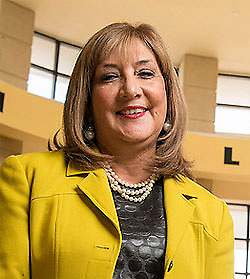 Noelia Longoria, who is one of HISD’s Principals of the Year for 2014, is now one step closer to being recognized at the state level for her exemplary campus leadership, after recently being named the Region 4 Principal of the Year by the Texas Association of Secondary School Principals (TASSP).

Longoria, who has led Ortíz Middle School since 2009, is a veteran educator with more than 30 years’ of experience. She serves as the lead principal for two other campuses, and her school was one of those selected to showcase the district’s best practices during the Broad Prize selection committee’s site visit in 2012.

Longoria attributes her school’s success to the implementation of support systems to improve both her teachers’ and her students’ performance.

“Our battle cry has been ‘Ortiz is all about learning,’ and it is not only our mission statement, but also the reality for students every day,” said Longoria. “During the 2012–2013 school year, Ortiz had the third-highest value-added scores in HISD. It also has some of the highest science scores and great student achievement among English as a Second Language students. More than half of our children are now enrolled in Pre-Advanced Placement courses and we consistently lead middle schools in state and national assessments.”

“Ms. Longoria has proven to be an excellent leader with a strong commitment to the education of our students,” said Chief School Officer Michael Cardona.

As the regional winner, Longoria is now eligible to be considered for state-level honors. She was also named HISD’s Principal of the Year in 2012.