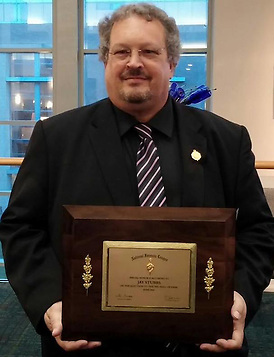 School may technically be out, but it’s been a busy summer for Jay Stubbs, Bellaire High School’s speech and debate coach. He took a team to nationals, was inducted into the National Forensic League Hall of Fame and received the Texas Bar Association’s Leon Jaworski Award for Teaching Excellence in Law Focused Education – all in June!

“Being inducted into the NFL Hall of Fame and receiving this award from the Texas Bar Association mean so much to me,” Stubbs said. “How lucky I am to receive awards on behalf of the successes of so many of my students.”

Stubbs has been at Bellaire HS since 1999. He’s coached hundreds of state qualifiers and 63 national qualifiers with multiple National Speech and Debate Tournament and National Catholic Forensic League finalists, including the 2010 national champion and a second-place finish in Lincoln-Douglas at NCFL.

Bellaire HS has won the Excellence in Debate award four times, most recently in 2014. Stubbs has a few more awards under his belt – the Distinguished Service Award and the 2006 national Coach of the Year award.

What does Stubbs have planned for July? Lots of rest and relaxation? Nope — he’s already back at work getting summer research assignments ready for students so they’ll be ready for the start of the new season in August.

“Jay Stubbs is a wonderful example of what commitment looks like on a large secondary campus,” Principal Michael McDonough said. “As I make my way through the summer months it is not uncommon to see Jay working with groups of students just before they head off to another national competition, or maybe he is being flown as a consultant to schools across the country as they look for the ‘secret ingredient’ required to build a wonderful speech and debate program within a large urban district. The bottom line is that he is driven by a need to not let down any students who need that extra push or the nudge to work themselves harder than they think they can. Being there for any of his students is simply the highest priority for Jay Stubbs. He is a teacher in the truest sense and I am proud to have known and worked alongside him for nearly 15 years.”