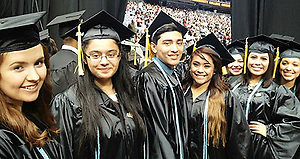 These EECHS students (black gown with blue cord) were some of the more than 100 seniors from that campus to receive their associate’s degrees from Houston Community College SE two weeks before their high school diplomas.

It’s been more than a decade since HISD opened its first early college high school off Loop 610, but the number of students taking full advantage of both their premise and their promise—the chance to finish high school with a diploma in one hand and an associate’s degree in the other—has been steadily rising.

Nowhere is this trend more evident than at HISD’s East Early College High School, where just over 100 seniors graduated this year with a college degree—a stunning 93.5 percent of its Class of 2014.

Principal Tamera Bolden attributes her school’s incredible success to a variety of factors, including a stellar attendance rate (98 percent) and the “unwavering support” of Dr. Irene Porcarello, the president of Houston Community College Southeast (HCC-SE).

“This would not be possible without a streamlined scheduling process and a 100 percent commitment from HCC-SE,” said Bolden. “It ensures that we have enough sections of all the classes needed in the dual-credit crosswalk, and we work constantly on the partnership itself, because the program would not succeed without it.”

Bolden is particularly proud of the fact that almost a third of the 101 associate’s degrees awarded to her students this year were in the field of science. “This is a difficult degree to earn while still in high school, due to the level of science and math classes needed, but every degree completion is a win-win for both HCC and EECHS,” she noted.

EECHS opened its doors in the fall of 2006. Its first graduating class (2010) had 14 students receiving their associate’s degrees. More than 230 HISD students from early college high schools across the district did the same this year.