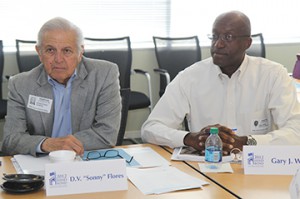 HISD’s two building programs are busier than ever, but in very different stages.

More details about the 2012 projects

More details about the 2007 projects

Sands provided an update Tuesday on the progress of both programs at the quarterly meeting of the district’s Bond Oversight Committee.

The nine-member panel heard from district staff on all aspects of the programs, with a focus on the second quarter months of April, May and June.

Committee members asked questions on a variety of topics, from finances to schedules. In particular, as the 2007 building program comes to a close, some wondered about the possibility of leftover money.

The 2007 program provided funding for 23 new schools as well as more than 180 renovation and repair projects. As of June 30, $115 million was available to complete remaining work within the program. How much money, if any, remains at the end won’t be known until all the projects are financially closed out, according to Chief Operations Officer Leo Bobadilla.

With the 2012 bond program moving ahead so quickly, at least one committee member expressed concern that the project schedule program may be too ambitious, considering inevitable and unforeseen delays in permitting and construction.

To date, district officials said they have been working with the City of Houston to ensure permit reviews go as smoothly as possible. The district is also working to ensure adequate funding for the impending construction, with plans to sell another tranche of bonds in September. Another sale could take place in the fourth quarter or in early 2015, according to Controller Sherrie Robinson.

Even as construction documents are reviewed and finalized, the district is moving ahead on planning and design for all the remaining 23 schools in the program. Over the past quarter, that work has included holding design charrettes for some of the district’s largest high schools – Bellaire, Lamar, Davis and Yates. Those schools, in the second phase of the program, are slated to begin construction in mid to late 2015.

In conjunction, the district has been hosting community meetings to ensure the plans and designs meet the needs of students and neighborhoods.

“None of these schools are cookie-cutter,” said Dan Bankhead, the district’s general manager for Facilities Design. In an effort to maximize community participation in the program, the district worked with interns over the past summer from high schools and the University of Houston.

As the district looks to rebuild or renovate 40 schools across the city, the goal is to ensure the new buildings can serve generations of students to come. One priority is creating sustainable facilities with eco-friendly design features that serve as learning tools. All of the schools in Group 1 and Group 2 are seeking LEED certification from the United State Green Building Council.

Looking ahead, Sands told the panel that the district is working with the schools in Group 3 and Group 4 to finalize the selection of architects to begin planning and design on those projects. To encourage architects to submit qualifications, the district hosted a meet and greet in June that attracted hundreds of participants.

HISD officials have spent the past few weeks interviewing potential firms. “My team is excited about that,” Sands said.