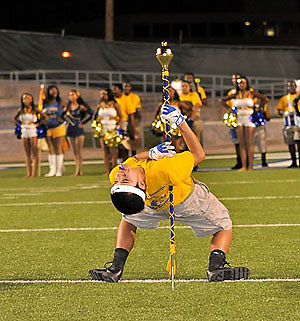 Brandon Pallares shows off some of the moves that earned him the drum major’s mace this year.

When Brandon Pallares walked into the center of Delmar Stadium on Sept. 4, he wasn’t just stepping out onto a football field—he was also stepping into HISD history.

This year, Brandon was named the first Hispanic solo drum major of the Baby Ocean of Soul in Booker T. Washington High School’s 120-year history, a reflection both of his skill as a leader and the growing diversity on the campus that was once known as Colored High School.

“Being the first didn’t really hit me until September fourth at halftime,” said Brandon, who has been playing the alto saxophone since the sixth grade. “I’m just a kid who loves music. But I’ve had my eye on the mace since the second semester of my ninth-grade year.”

To make his accomplishment even more impressive, Brandon had no previous marching band experience before last fall, and this year, he is still only a sophomore.

“Brandon is an awesome young man and a great student leader,” said Principal LaShonda Bilbo-Ervin. “He is also in our magnet program, and active in several school activities on campus.”

To recognize his achievement, Mayor Annise Parker presented him with a proclamation declaring Sept. 4 “Brandon Pallares Day” in Houston. You can see more photos of Brandon in action here.