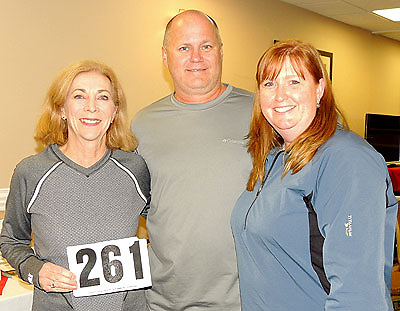 Endurance runners and HISD employees Alyssa Howell (right) and her husband, John Smith, pose with Kathrine Switzer, the first woman to officially run the Boston Marathon, at a pre-race dinner in Syracuse, New York, on Oct. 18. Switzer is holding the bib number she wore during the 1967 Boston Marathon, in which she broke the previously all-male tradition.

Ever wonder what it’s like to meet one of your personal heroes? If so, just ask HISD Teacher Development Specialist Alyssa Howell or her husband, John Smith, who teaches at Sutton Elementary School.

The night before competing in the Empire State half-marathon in upstate New York on Oct. 19, Howell and Smith got to meet and have dinner with Kathrine Switzer, the first woman to officially run in the prestigious Boston Marathon. Switzer entered the previously all-male race back in 1967 and completed it despite being physically assaulted by the race manager around mile six.

“Kathrine’s story as a female groundbreaker has always fascinated and inspired me,” said Howell, who entered herself and her spouse in the race as a Valentine’s Day present. “She was so down-to-earth and genuine. She still loves running and does everything in her power to promote the sport and encourage women. And her actions meant that I never had to doubt women could do anything men could do. Kathrine makes you feel as if you can run a marathon every day.”

Howell noted that she actually met her husband through their shared love for endurance sports, and he was the one who inspired her to try her first half-marathon.

“Ms. Switzer is an important figure in America’s cultural history, and John wanted to meet her so that he could share that experience with his students,” added Howell. “She is an excellent role model for how the pursuit of dreams can sometimes change the world.”