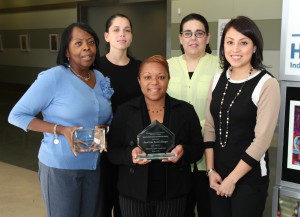 The award is presented annually to an organization or individual whose business practices have had a significant impact on the growth and development of minority-owned firms.

Licata heads up HISD’s Supplier Diversity team and leads the district’s efforts to increase the number of minority- and women-owned business enterprises (M/WBE) that do business with HISD. The team also earned a special recognition award during the ceremony for its achievements.

“I’m honored to receive this recognition for our work with M/WBEs,” Licata said. “The credit really goes to my whole team, which is committed to proactive minority outreach and to providing assistance to minority businesses.”

HISD’s Business Assistance Supplier Diversity department regularly plans outreach and networking events to engage M/WBEs and keep them informed of business opportunities, not only within the district but also as subcontractors on 2012 bond projects.

“Over the last few years we have seen a significant increase in M/WBE participation, particularly in our bond projects,” said Leo Bobadilla, HISD’S chief operating officer. “Alexis and her team have had a lot to do with that, so this award is well-deserved.”

MED Week was designated by a presidential proclamation in 1983 to recognize and promote achievements of minority-owned businesses and their advocates. It is a national initiative of the U.S. Department of Commerce’s Minority Business Development Agency, which is run locally by Houston Community College.