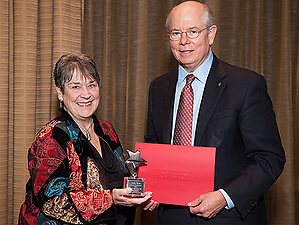 A talent for obtaining federal grants that have benefitted both HISD teachers and the institution where they studied has earned Secondary Social Studies Curriculum Manager Angela Miller recognition this year from the University of Houston (UH). Miller was recently named the sole “dean’s choice” Star Award winner for 2014 by that school’s College of Education.

“The Star Awards are an opportunity for us to shine a light on our best and brightest alumni, faculty, and students,” said UH College of Education Director of Advancement Brandie Cleaver. “The Dean’s Recognition Award is to honor those individuals who have made an impact on the UH community but don’t necessarily fit into one of those categories.”

Miller, who is the only recipient of the award this year, has served as the project director for multiple Teaching American History grants from the U.S. Department of Education. These grants have paid the salaries of numerous graduate assistants over the past 10 years and covered the costs of summer tuition for more than five dozen HISD teachers, 39 of whom went on to obtain advanced degrees.

“We think Angela deserves a big thank you,” added Dr. Sara McNeil, an associate professor and graduate program coordinator at UH. “These grants have amounted to millions of dollars in grant funding and a significant amount of support for UH.”

Miller was formally recognized during an awards ceremony held at the university campus on Nov. 7.