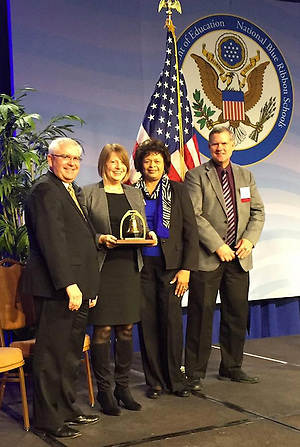 The Houston Academy for International Studies (HAIS) was officially recognized as a National Blue Ribbon School at an awards ceremony on Nov. 11 in Washington, D.C., and Principal Melissa Jacobs-Thibaut was also presented with the Terrel H. Bell Award for Outstanding School Leadership.

The award recognizes campus leaders who are committed to doing whatever it takes to help their students meet high standards. The award’s namesake served as secretary of education from 1981 to 1985.

HAIS is one of the district’s early college high schools, offering students the chance to complete an associate’s degree through Houston Community College while simultaneously earning their high school diploma. Students are required to take four years of a foreign language (Spanish or Mandarin Chinese), take a course in Model United Nations, and create a portfolio of projects with a global perspective.  The school actively seeks out scholarships and offers students opportunities to travel abroad.