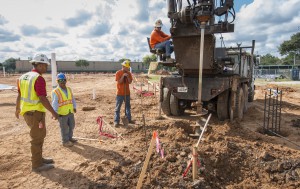 Construction work is underway at the Worthing HS campus.

Several schools will be celebrating major construction milestones in December as they hold groundbreaking or beam-signing ceremonies for their bond projects.

The Mandarin Chinese Language Immersion Magnet School is hosting a groundbreaking at 10 a.m. on Saturday, Dec. 6, to mark the start of work on a new $32.2 million facility in the Galleria area. The new school, located at 5440 W. Alabama, will be a K-8 campus with the goal of creating bilingual students.

On Dec. 11, Worthing High School will hold a beam signing at 9:30 a.m. at its 9215 Scott Street campus to mark progress on the construction of a new two-story classroom wing.

And on Dec. 14, at 2 p.m. in downtown Houston, the High School for the Performing & Visual Arts is planning a groundbreaking to mark the start of work on a new $80.2 million school at 790 Austin St.

Milby High School will celebrate construction activities at 2 p.m. on Dec. 18 at 1601 Broadway as work continues on the school’s $68.8 million facility.

“We’re extremely pleased with all the progress in the 2012 bond program,” said Robert L. Sands Jr., HISD’s Officer of Construction & Facility Services. “These events help showcase how far we’ve come since voters approved the bond program in November 2012. We’re proud of the work of our architects, program managers and Project Advisory Teams.”

Not all schools are holding ceremonies, but that doesn’t mean work isn’t happening. All of the remaining schools in the first group of 17 projects will be in the construction phase by the end of the year, whether it’s early site or utility work, or major construction.

“We know everybody is ready to see the steel start going up, and we are too,” Sands said.