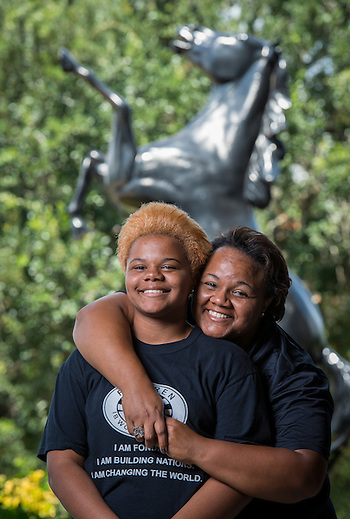 As a district of choice, Fondren is one of several IB schools that HISD families can choose. The rigorous and broad IB program empowers students to become bilingual and biliterate learners who embrace multiculturalism and diversity. The deadline to apply to an IB program is Friday, Dec. 19.

There are 17 different student populations at Fondren, and more than 21 dialects and languages are spoken on the campus. Spanish is among the school’s eight core classes, and within each one, there is a global element.

When learning ratio proportions in math, students have researched the difference between the U.S. dollar and other currencies from around the world and studied monuments such as the Egyptian pyramids and the Sphinx to see how proportions work and to understand relationships between numbers. In history, students have been tasked with translating a journal about their research and thoughts on Saudi Arabia into Arabic.

“The IB program has been influential in providing a learning mechanism that has strengthened my child’s performance in math and English,” said Tamokia Thompson, whose daughter graduated from Fondren in June. “The program has challenged her to think independently.” 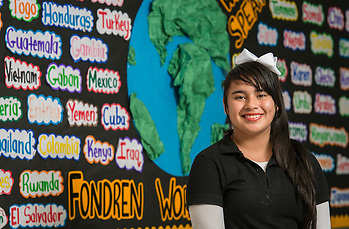 Daniela Fuentes poses for a photograph at Fondren Middle School, November 24, 2014. Fuentes, of El Salvador, received the City of Houston Citizenship Month Literary Award for a poem she wrote.

All students at Fondren are taught at a high-quality level of instruction by teachers who are trained in IB world standards, Vanguard, and project-based learning in order to develop curriculum around a global standpoint.

“If we want our students to be able to function worldwide and not just in Houston, studying different countries is vital,” said Fondren magnet coordinator Melodye Montgomery. “Our students need these skills if we expect them to be competitive in the 21st century because they will be global leaders and not just leaders in the U.S.”