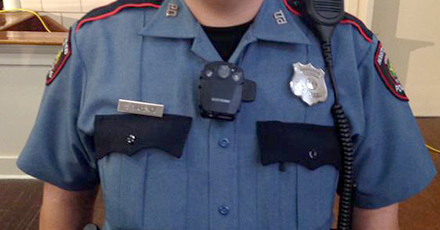 An HISD police officer wears one of the body cameras being tested this month.

More than two dozen HISD police officers are patrolling campuses across the district with small cameras clipped to their lapels as part of a pilot program designed to provide an additional tool in boosting student and school safety.

Twenty-five officers began testing the first cameras this month, wearing them while monitoring schools and responding to various incidents. The department aims to fully outfit the 210-officer department with cameras by the 2015-2016 school year.

“As the largest district in the state, we have close to 300 schools, 215,000 students and 28,000 employees that we need to keep safe,” said HISD Police Chief Robert Mock. “These cameras will serve as a vital tool to better monitor school environments, evaluate school incidents, and ensure our officers are performing well.”

The four-month pilot program comes after more than a year of research into the use and benefits provided by the cameras. Surrounding law enforcement agencies — including the Harris County Sheriff’s Office and Houston Police Department — are also piloting body cameras.

“We will be one of the largest districts to have them on hand,” Mock said. “As local law enforcement prepare to use this tool, it’s important that our officers are well-equipped, too, to ensure the safety of our district and the transparency of our department.”

After purchasing the initial installment, the department is now seeking grant funding for the remaining cameras. They could potentially qualify for funding through President Barack Obama’s proposed $263 million investment package designed to increase the use of body cameras among police officers.