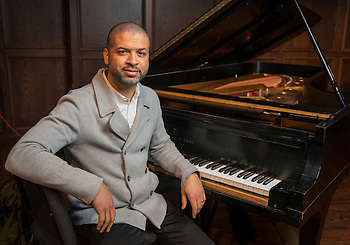 It’s one thing to hear about inspiring, but long-dead, historic figures as a part of Black History Month, but it’s another entirely to have a living, breathing legend in your classroom—and almost beyond imagining that as a student, you might get to work alongside that person on a creative project.

But that is exactly what students at three HISD schools will be doing over the next couple of years, as a part of the Jason Moran Homecoming Residency sponsored by Da Camera.

Moran, an acclaimed jazz pianist who was named a MacArthur Fellow in 2010 and wrote the score for the recent hit Hollywood film, Selma, will be working with students at the schools he attended as a child: MacGregor Elementary School, the Gregory Lincoln Education Center, and the High School for the Performing and Visual Arts (HSPVA), from which he graduated in 1993.

As a part of that collaboration, Moran visited the schools during the first week of February, where he encouraged students to explore their artistic sides in theater, photography, dance, and any other venue they found interesting.

“Being engaged by other art forms is so important,” he said. “I look for a way to work with other creative people.”

Moran and two of his band members emphasized that point by playing jazz music for HSPVA students on Feb. 3, while they wrote in their journals, then asked them to read aloud the first lines of what they had written.

“Everything is connected,” he noted.

The inaugural stage of the partnership will culminate in a public performance of students’ work in the spring of 2015. Moran will return to Houston over the next couple of years for additional school-related activities.

This is the first in a weekly series of articles on HISD artists as a part of Black History Month.