Felipe Guillén has been a student at Stanford University since last fall, but the Chávez High School graduate might not be at his “new home” at all if it weren’t for HISD’s EMERGE program.

“My dream became a reality because of those who believed in me,” said Guillén, who was this year’s featured student speaker at the State of the Schools luncheon on Feb. 11. “The EMERGE program changed my understanding of the world and opened my mind up to new things.” 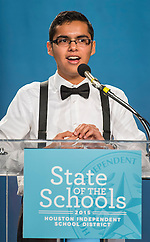 Guillén said that he considers himself “very lucky” to have received all of the support he did through EMERGE, as one Stanford classmate from Detroit confided that he had been actively discouraged by his counselor when he expressed an interest in applying to Ivy League schools.

“I owe everything to my friends Lili, Janet, and José, who pushed me to join EMERGE,” he said, “and to (now Director of School Support) August Hamilton, who guided me through the entire process. He was extremely patient with me.”

Guillén describes Stanford as “even better than I expected. I thought I was going to be marginalized, but the experience has been really positive. My dorm is really close, and there’s a lot of support.”

Now, the freshman just has to pass his Intro to Computer Science course. “I’m struggling with it,” he said, “but I’m glad students are going to be learning more about coding now, so they won’t struggle as much as I do.”

Among his most satisfying moments so far was the first time a professor praised him for a paper he’d written. “He said, ‘I don’t know what kind of training you had, but whatever you’re doing, keep doing it.’”

Guillén is one of five current or former HISD students who blogs about his experiences with the EMERGE program. Read his latest post or learn more about him and the other students, please visit the EMERGing Voices blog.