Dr. Roslyn Stiles Vaughn, principal of Anderson Elementary Dual Language School, was honored by the Houston Area Alliance of Black School Educators (HAABSE) with the 2015 Living Legend Award. Dr. Vaughn has served the district for 36 years, 28 of those at Anderson ES. She began her career as a teacher at Scarborough, Brookline, and then Anderson elementary schools, before serving as principal for 16 years. 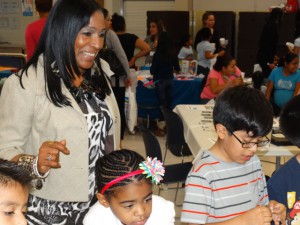 Through the years, Dr. Vaughn has promoted student academic excellence with emphasis on teaching and reaching the ‘whole child,’ having had a Texas A+ School and an award-winning band and cheerleading squad. Her school also produced multiple HISD Teachers of the Year, including the Bilingual and Rookie Teacher of the Year. She enjoys sharing her knowledge and expertise as a mentor to new HISD principals. Dr. Vaughn attributes her success to a shared vision of positivity, mutual support, and continued growth among her students, faculty, and staff.

During her 20-year membership with the HAABSE, Dr. Vaughn has held several offices, including president-elect and recording secretary, and is currently serving as historian. She has been named principal of the year by HISD’s Southwest District, radio station KMJQ Magic 102, and Fiesta Stores, and has received congressional recognition for outstanding leadership from Texas State Representative Sheila Jackson Lee.