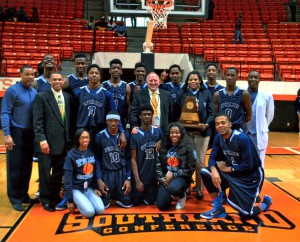 The Sterling Aviation High School Raiders boys basketball team is a contender for the first time in school history for the State 4A Championship title. The team will be playing the La Marque Cougars in the semifinals Friday, March 13 at 3:00 p.m. in San Antonio’s Alamodome. The winner will play in the finals against either Dallas Madison or Bridgeport on Saturday.

Under the guidance of Coach Andrea Young, the Raiders are the top-ranked 4A team in the playoffs. They were ranked second in the state at the end of the regular season by the Texas Association of Basketball Coaches 4A poll.

This is the first time Sterling has played past the second round in 14 years. The entire school is supporting the team.

“We are so ecstatic,” said Principal Dale Mitchell. “The students, the faculty and the community are all excited.”

The school will send the team off with a big pep rally Thursday with a guest appearance by the Harlem Globetrotters. Sterling HS alumnus Clyde Drexler is expected to Skype with team members before they leave.

Sterling Aviation HS is a magnet school for Aviation Sciences, and in celebration of the basketball team, the Aviation Magnet upper classmen are planning to fly to Saturday’s playoff game.

As part of their certification, each student must complete long distance day and night flights. The trip will count as flight hours toward certification, and the students and instructors will be able to attend the game to support their team.