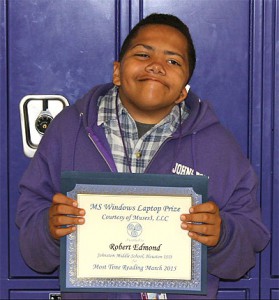 Robert Edmond, a sixth-grader at Johnston Middle School, has been named the second “Reader Leader” by myON for logging the most time spent reading on that website during a particular month.

Alfredo read for 13 hours and eight minutes on myON in March. He also completed 109 books and took their accompanying quizzes.

As a part of his prize, Robert received a laptop (with computer case) from Muses3, LLC, the representative of myON in southeast Texas.

“This was another very tight race,” said Linda Bessmer, managing partner of Muses3. “Robert’s teacher, Wilfred Dacus, instituted a myON Camp for his Life Skills students, where they spent concentrated time reading on myON, and several other Johnston students were only minutes away from the leader’s record, with elementary students close behind.”

Robert was formally recognized during a special ceremony held on his campus April 10.