High School Ahead Academy bus driver Clarissa Davis had no idea she would be recognized for going above and beyond her daily route assignment to help a student in need. 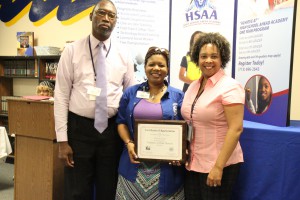 But Davis and four other HISD employees and volunteers were honored for their services during a special luncheon held on April 30. She says she has only been with the district since last November and was surprised to discover she would be receiving an award for simply doing her job.

“I’m really humbled,” Davis said. “I just treat students how I would want anyone else to treat my own children.”

High School Ahead Academy social worker Marsha Dunn said Davis was honored after noticing a student had missed his bus and went back home to get his bicycle. However, the route to school was in excess of 10 miles. Davis stopped her bus after recognizing the High School Ahead Academy student and transported both him and his bicycle to and from school.

“The student had a history of missing his bus, but after Mrs. Davis’ act of kindness, we have not had any trouble with getting him to his bus stop on time,” Dunn said. “She didn’t have to do that, but she felt a child was in danger and she stepped in.”

HISD Transportation Manager Alan Delaney says the department is extremely proud of Davis for implementing the district’s service philosophy of providing exceptional service that creates a safe and caring environment.

“It just goes to show what can be accomplished simply by doing what you’re expected to do,” Delaney said. “Although she didn’t expect this honor, for her to be recognized by her campus is what we are trying to accomplish with Service Excellence.”

Davis says she doesn’t mind stepping in and transporting additional students to and from school if they miss their bus, or when a bus breaks down. She also says many times, students just need someone to listen and care.

“I always treat my passengers like people and I respect everyone no matter what,” Davis said. “I’m really shocked that someone would take notice, and I am thankful.”