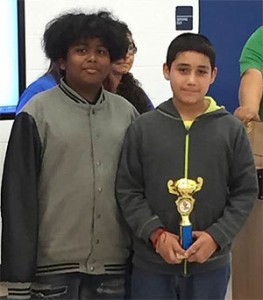 The team from McGowen ES, who won first place in the beginner division

About 50 teams of students from various HISD elementary and middle schools came together on the campus of Hamilton Middle School May 2, and all were eager to test their mettle as coders in the school’s inaugural “Scratch Off” contest.

Named in honor of the free programming language developed at the Massachusetts Institute of Technology, the competition challenged students to complete 20 tasks using Scratch, such as making an animated character called a “sprite” change color or move in particular ways on the screen.

By the time the competition was over, Pin Oak Middle School had nailed down the victory in the advanced division, while a team of students from McGowen Elementary School took home the laurels in the beginner division.

“Coding is very new to me,” explained Hamilton MS teacher and coding club sponsor Natalie Price. “But kids today do a lot of gaming, and we thought if we could bring them into what makes these games work and show them how to actually make it happen, that would be pretty exciting. So that’s how we advertised it to students.”

The contest generated so much interest that Price had to cut off the registration at 50 teams, but she hopes to maintain the momentum generated by the competition to keep students learning.

“They started off on Scratch,” added Price, “but they’re learning Python now, and we hope to increase it and build on what they’ve learned.”

The contest was funded in part by a year-long coding grant received from Schlumberger.

Here are the full results: