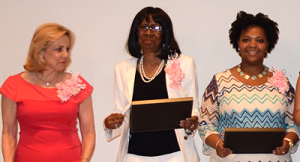 HISD’s Health and Medical Services department recognized almost two dozen campus and district healthcare workers on May 15, during a districtwide tribute to “Excellence in Nursing.”

Among those honored were the district’s Nurses of the Year for 2015: Worthing High School’s Majorie Robinson-Vaval at the secondary level — and, in a first for the district, both Evelyn Skinner from Osborne and Cynthia Tanner from Walnut Bend, who tied for the top prize at the elementary level.

Robinson-Vaval and Skinner both credit advanced listening skills for their success as nurses.

“I can begin my assessment on each student even before they enter the office,” explained Robinson-Vaval, who learned to make “quick, but thorough” assessments as a pediatric intensive-care nurse. “I can hear… if they are limping, running, laughing and talking, or struggling to breathe.”

“School nursing is more than taking care of aches and pains,” added Skinner, who has been at Osborne for six years and a school nurse for 18. “Listening is the key. About 15 percent of the time, children are not sick. They just need some TLC.”

Tanner was selected in part for her focus on preventative medicine. “Health objectives and educational objectives are closely related,” she said, “and more students come to school acutely and chronically ill. I am proud to say that Walnut Bend is currently 100% in compliance with the state’s vaccine requirement.”

Also honored this year were:

“The AED awards and the Lou Taylor Award were a first for this year,” said Health & Medical Services Manager Gwen Johnson. “The former came about because until now, we’ve never had to use those devices, but I’m happy to report that all three children were saved, thanks to the nurses’ quick actions. The Lou Taylor Award was named for one of the first three nurse practictioners in HISD. She retired in August of 2011, with 48 years of service to the district.”