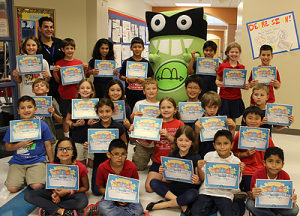 Attending a dual-language school has really paid off for one group of third-graders at Twain Elementary School.

Francisco Martinez’s Spanish immersion class at Twain has been named a national winner in the DreamBox Learning Math Challenge, a competition that requires students in grades K–8 to solve various math problems in Spanish.

Martinez’ students won the grand prize in the “Highest Average Lessons” category by completing 4,872 math games, for an average of 203.8 lessons per student. The children were formally recognized during a special ceremony held on campus May 13, during which DreamBox representatives delivered five iPads, bracelets, certificates, and pizza to the winning class.

“I love to integrate DreamBox in my classroom because it adapts to every student’s individual needs,” said Martinez. “It exposes my students to new Spanish vocabulary—especially math vocabulary—which is vital to my dual-language classroom. I’m all for it.”

“This is a great example of the deep levels of engagement, excitement, and motivation that students are demonstrating while mastering math concepts and achieving math proficiency,” said Jessie Woolley-Wilson, president and CEO of DreamBox Learning. “We are happy to be partnering with HISD to provide all students with personalized learning opportunities to acquire the skills they need to succeed not only in math, but also in life.”