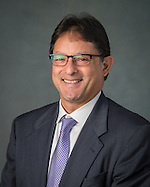 Dr. Carlos Ramirez has been named a new elementary school support officer. He has served in a variety of roles, including teacher, assistant principal, principal, and deputy superintendent over the course of his 24 years in education.