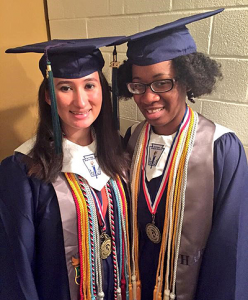 The numbers are in, and HISD’s Class of 2015 has received almost $265 million in scholarship and financial aid offers.

At $10 million more than the Class of 2014, Director of College Readiness David Johnston called the figure “a testament to the district’s college readiness efforts.” A handful of campuses have also seen significant increases in the amount of money their seniors have been offered from last year to this one.

College Success Manager Pamela Joyce Williams attributes Washington High School’s jump from about $2,360,000 in 2014 to more than $7,223,000 in 2015 to a year-long outreach campaign, in which she sent students and their parents regular progress reports and email reminders about deadlines through Naviance.

“Seniors turned in their applications when I began showcasing how much money they could receive for college,” said Williams. “Forming relationships with the students and parents was key, because they knew I had their best interests at heart.”

Whitney Casey Griffin, the college access coordinator at the Houston Academy for International Studies, said that her own hiring last fall likely contributed to the school’s jump from about $1,453,000 in 2014 to more than $5,104,000 in 2015.

“Last year, it was all on the counselor, and she was having to manage testing, counseling, and scheduling, too,” said Griffin. “Then they hired me, and I started thinking about what I would have wanted when I was a senior. So I began offering workshops on applications, recommendations, and essay writing.”

Clearly, Griffin’s techniques are effective, as two students alone (Karina Barbosa and Rynique Lucas) netted more than $1.7 million in offers between them.

“Rynique is a real go-getter and an EMERGE scholar, and she graduated with her associate’s degree in the top 10 percent of her class while taking AP courses and working at Kroger almost every night,” said Griffin. “She got a full ride to study genetics at the University of Rochester. Karina applied for every scholarship she could — even one given out by the Greater Houston Black Chamber of Commerce. She’s Hispanic, but she was the only HAIS student who applied for it, and she was one of only five seniors in Houston who got it.”