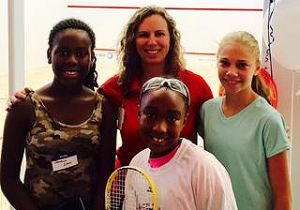 Principal Angela Sugarek celebrates the opening of new squash courts at Hogg MS with some of her students on Aug. 29.

Hogg Middle School recently became the first public school in the U.S. to house squash courts on its campus and the first in Texas to offer in-school squash courses for physical education credit.

Principal Angela Sugarek and dozens of her students celebrated this milestone with a ribbon-cutting ceremony at the new in-house courts on Aug. 29.

The state-of-the-art squash and education facility — which was built in partnership with Mission Squash — was constructed out of an existing but underutilized gym at no cost to the school. The renovated space now houses three internationally sized squash courts, a multipurpose learning center, locker rooms, and an academic lab with a full-capacity classroom and multimedia education tools.

“The abundance of ‘firsts’ we have achieved is quite remarkable,” says Brian DiFilippo, the program’s assistant executive director. “We have elaborated on the urban squash formula — already unique in itself — to create an innovative and completely new model of youth development for the underserved children of Houston. Many of our students lack adequate encouragement, confidence, and support from their surrounding social environments. Our ultimate goal is to give these children the tools to excel both on and off the court and to instill in them the integrity and character to become active, caring, and productive members of their communities as adults.”

Starting this fall, Mission Squash will provide squash courses during school hours to Hogg students, increasing the program’s total capacity from 24 to 132 students each semester.