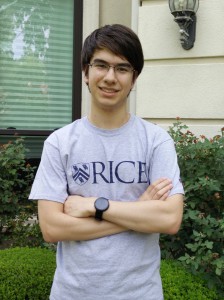 The SAT and ACT are both college entrance exams, but they cover different subject areas. The SAT covers critical reading, math, and writing; while the ACT covers English, mathematics, reading, science and an optional writing test.

Increasing access to college entrance exams has been a key focus for HISD. In 2011, Dr. Grier decided to allow all high school juniors to take the SAT for free at their home campus during regular school hours. All students receive free access to Khan Academy’s SAT Test Prep and Naviance SAT Test Prep.  Both online platforms prepare students for the new redesigned PSAT and SAT.  SAT participation has nearly doubled as a result of the measures.

“I am so proud of these students. To do well on a college entrance exam is commendable, but to earn a perfect score is simply phenomenal,” Dr. Grier said. “Acing the SAT will open doors for these students that they never thought possible.”

Yun said his motivation comes from the friendly rivalry he shares with his older brother, who also scored a perfect score on his SAT and now attends the University of Texas.

“My brother and I are always competing,” Yun said. “When he scored a perfect score on the SAT, I thought, ‘Wow! I can do better.’”

Rather than buy a bunch of guide books or spend hours studying, Yun said he simply relied on the information he learned from his Bellaire Advanced Placement teachers to ace the exams. Upon graduation, Yun plans to study computer science at either the University of Texas, Stanford, MIT, Cal Tech, or Carnegie Melon.

“When I got those two perfect scores, it was a huge relief,” Yun said. “My family was so proud.”