In this week’s “I Am HISD,” which features district students, graduates, employees, volunteers, and other team members, Sam Houston Math, Science & Technology Center chemistry teacher Nichole DePaul-Miller talks about how she got involved in the world of professional bowling, what led her to a career in education, and why she still acts as a consultant for various bowling centers. 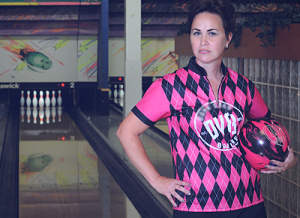 I hear that you’re a professional bowler, but you’re also teaching pre-Advanced Placement (AP) and AP chemistry at Sam Houston Math, Science & Technology Center. Which came first, the bowling or the chemistry?

Actually, they both kind of happened at the same time. I started bowling when I was three. My mom and dad bowled while they were dating, and I was practically born in a bowling center, so you might say I come from a bowling family. I bowled collegiately at Illinois State, too, while getting my degree in chemistry. Originally, I was going to try to stay in that field and work as an engineer, but the women’s tour disbanded in 2003 due to lack of funding, and I switched from being a chemist working in the bowling industry to an educator who just loves bowling.

Wait. So you’re saying you worked as a chemist in the bowling industry? What did you do, exactly?

Well, without breaching confidentiality agreements, I was in research and development, working with what we call lane machines. It involves physics, math, and chemistry, and I was working with different bowling centers to create lane patterns so that any bowler could get higher scores in games. I still do some consulting in that area now.

Wow. I had no idea there was so much science behind the sport.

Yes. Most people don’t realize how much math and science is involved. There are times I have a chance to talk about it, but it’s mostly just the physics aspect people think of, like drive and motion, so it’s hard to bring the chemistry piece back into it.

Do you talk about bowling and its connection to chemistry with your students?

No, not really. I try to keep my professional life separate from my private life, so I don’t talk about bowling very much. But we are trying to get more youth onboard, and I’ve started an after-school bowling club for girls on campus.

Do you think you’ll ever bowl professionally again?

Oh, yes. Last year, the U.S. Bowling Congress brought back the PWBA (Professional Women’s Bowling Association), and after a lot of discussion with my husband, he said, “Why don’t you go on tour?”

The beauty of the tour for me was that it took place during the summer months, so I didn’t have to worry about taking time off or rushing home to grade papers. I bowled four of the nine tournament stops and ended up somewhere in the top 50. It was very hard, but I’m so glad I got to do it. I did pretty well, considering I was competing against some of the best lady bowlers in the world. They came from all over: Singapore, Ukraine, Colombia, and Brazil.

5 thoughts on “Chemistry teacher has a secret alter-ego: professional bowler”