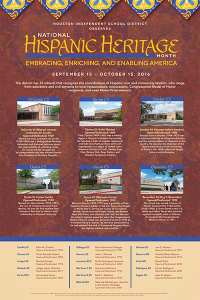 Rodríguez ES — One of 10 schools built with Rebuild 2002 funds, this facility was named after Sylvan Rodríguez, the late KHOU-TV newsman who served as a city and community role model for more than 25 years. The school, located on almost 10 acres in southwest Houston, relieved overcrowded conditions at neighboring Benavídez, Braeburn, Leroy Cunningham, and Samuel Red elementary schools. It opened during the first week of 2002.

Sánchez ES — George Isidoro Sánchez (1906–1972) was a national authority on bilingual education and the social problems of Hispanics in this country. He taught the history and philosophy of education at the University of Texas, where he also served as chairman of the History Department in the 1950s. The school named for him opened in 1985.

Seguín ES — Seguín Elementary School was named for Juan N. Seguín, a San Antonio resident who fought against Santa Anna in 1835 during the Texas Revolution. Seguín also served as that city’s provisional mayor and survived the first part of the Alamo siege. The school named for him opened in the fall of 2002. It is one of 10 schools built with Rebuild 2002 funds.

Tijerina ES — Felix Tijerina (1905–1965) was a leading figure in Houston’s Hispanic community. He founded a chain of popular restaurants and held important positions with such organizations as the League of United Latin-American Citizens (LULAC), the Variety Boys’ Club, the Rotary Club, Boys’ Harbor, and the Houston Symphony Society. The school named for him was built in 1980.