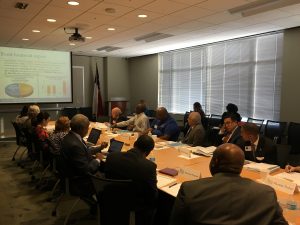 “The quantity of contracts that we’ve moved through the process is incredible,” Sanders said. “We’ve gotten a lot done, but have a lot more to do. We welcome the challenge.”

The BOC, an independent group of citizens tasked with monitoring implementation of the district’s $1.89 billion bond program, received an update on the status of the bond program, including financial and budget reports, M/WBE (minority and women-owned business enterprises) participation rates, program highlights, and the status of some individual projects.

The group also got to view a video showcasing the 21st Century learning environments now in use at the new schools opened this fall: Condit and Mark White elementary schools, North Houston Early College High School, South Early College High School, Mandarin Immersion Magnet School, and the Worthing High School (Phase 1) classroom addition. The district also opened Fonwood Early Childhood Center, which was not featured in the video because it is not funded by bond proceeds.

”I really like seeing the new schools and the kids in the schools,” said BOC member Phoebe Tudor. “To see them interacting in the new spaces that we’ve been talking so much about and wondering how it’s all going to work — it’s wonderful to see it coming true.”

Two more schools, Sterling Aviation High School and DeBakey High School for Health Professions, are set to open in January. Four additional schools — Mickey Leland College Preparatory Academy for Young Men and Furr, Wisdom and Milby high schools — are on track to be completed by the second quarter of 2017.

During the meeting, committee members asked questions about price per-square-foot trends, M/WBE calculation methods, and the traffic light report, which identifies projects that have been delayed.

The group also had the opportunity to meet new HISD Superintendent Richard Carranza, who stopped by the meeting to introduce himself and thank the members for their participation.

“Your service is incredibly important as we steward this bond to completion,” Carranza said. “I’m very proud of the work that is happening in the bond and the excellent team in place. I ask that you keep a critical eye and continue to give your input to ensure that the program is transparent and open.”

Approved by Houston voters in 2012, the HISD bond program is renovating or rebuilding 40 schools, including 29 high schools across the district. Once complete, HISD will have one of the most modern portfolios of urban high schools in the country.

The bond program also includes work that will benefit students across the district, including $100 million in technology upgrades, $44.7 million to replace regional fieldhouses and improve athletics facilities, $35 million to renovate middle school restrooms, and $17.3 million for safety and security improvements.

“I’ve been impressed with the scale of what we’re doing here,” BOC member Bob Eury said of the bond program. “It’s fundamentally important to the economy and future of our city. It will change things.”