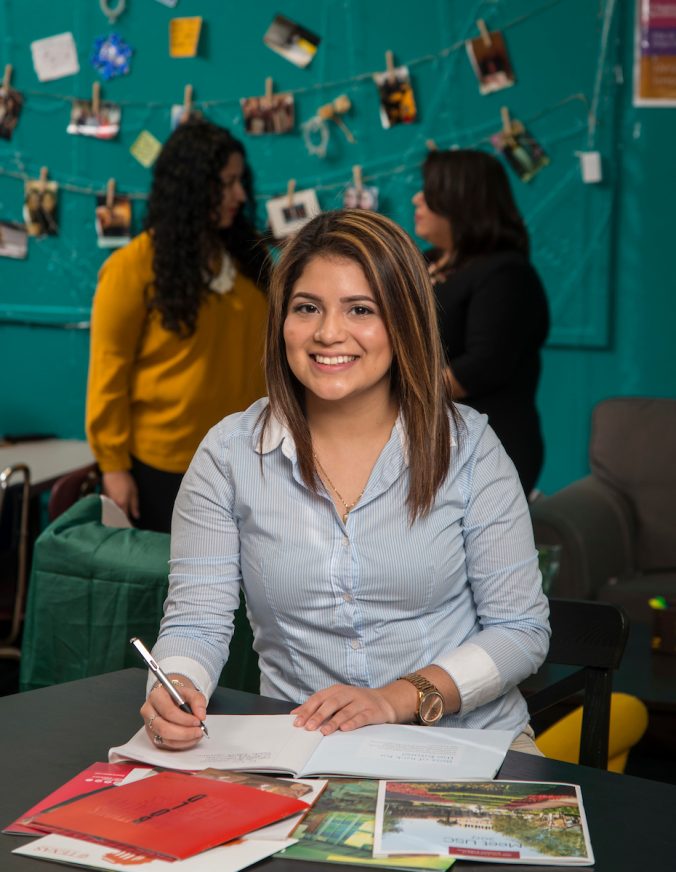 Nataly Degollado was able to envision herself at a four-year college with the help of the college success team at Austin High. HISD has 32 college success advisers, who were put in place with matching funds from the Houston Endowment. The program has propelled the district’s college application rate from 59 percent to 79 percent, and the FAFSA application rate has grown by 10 percentage points.

College Success Adviser Victoria Salinas holds court in the middle of a brightly painted classroom at Austin High, fielding inquiries about tax forms and deadlines as students with laptops occupy nearby couches. Others wander in with questions that could propel them to a very different future than the one they imagined for themselves.

One of those students was Nataly Degollado. Two years ago, the 18-year-old had a baby. She struggled to balance school and her daughter, but even on her hardest days, she never gave up.

She went to the college center with a FAFSA in hand and plans to get certified in cosmetology — to her, it was the fastest way to a paycheck. But the college success team at Austin pushed her to think bigger. They helped her discover another passion: teaching. Salinas, who has helped to more than double the college application rate at Austin, sat down with Nataly to fill out forms for four-year colleges. She sees stories like Nataly’s every day.

“Some students think, ‘This is what we do, this is what’s traditional, this is what’s expected of me,’ ” said Salinas, a first-generation college student herself. The biggest challenge is changing how students think about what’s possible. “I’ve focused on them having a growth mindset versus a fixed mindset.”

Nataly’s mother was also an inspiration. She was a single mother, Nataly said, and “now, she has bought her own house, and she’s a teacher for special education.”

Nataly has been accepted to both University of Houston-Downtown and Texas Southern University and plans to become a Spanish teacher.