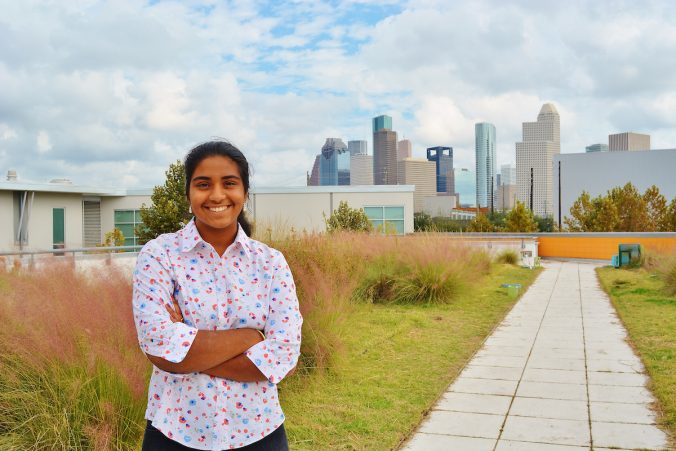 For the third year in a row, Houston’s Youth Poet Laureate is an HISD student, and this year, the honor goes to Carnegie Vanguard High School senior Rukmini Kalamangalam.

Kalamangalam has big plans for the coming year. As part of the job, she is a cultural arts advisor on Mayor Turner’s Youth Council.

“I would like to establish a space where young poets and other artists can collaborate and share their experiences,” she said. “I would also like to start a column in a local publication where students can publish their favorite poems, and I would like to implement poetry readings in public places where people gather.”

“Rukmini is a perfect example of a gifted student who has illustrated her mastery of both the written and spoken word, not only in class but outside of class,” he said. “We always look forward to her performances in school assemblies, especially pep rallies, where she motivates students with her positive outlook. We can’t wait to see her inspire others as the 2018 Houston Youth Poet Laureate.”

The Youth Poet Laureate position was created by Writers in the Schools in partnership with the Houston Public Library, City of Houston, and Office of the Mayor. The competition is fierce, and Kalamangalam is familiar with the application process, as she has applied three times: submit five poems, three essays, and a resume. The top five finalists are interviewed by a panel of experts and narrowed down to two. The mayor makes the final selection, and the winner is announced at the annual WITS gala, which took place this year on Thursday, Nov. 9.

Kalamangalam is of Indian descent, but she was born in England, where her parents met in graduate school. They moved to the U.S. when she was six, and she is a product of HISD, having attended Roberts Elementary and Lanier Middle schools prior to Carnegie Vanguard. She plans to study economics in college and follow that with studies in international law. Her dream job is to work at the United Nations. “I want to help our society make progress as a whole, so I need a solid foundation of knowledge regarding where we have been in order to focus on where to go next and what really matters.”

Kalamangalam has been a writer for as long as she can remember, but she didn’t get interested in poetry until eighth grade, when she auditioned for Houston’s Meta-Four, a poetry-slam youth team.

“I didn’t qualify that year, but I made it the next year. We went to Atlanta for the International Youth Poetry Slam Festival that summer, and I was there with 600 young poets from all over the world. That was the first time I understood the power of our voice and the concept of social justice. I had been living in a bubble, and that bubble popped.”

Kalamangalam is looking forward to serving her term, saying, “It will be a busy year, but this is a priority for me, as I have been thinking about it for the past three years.”