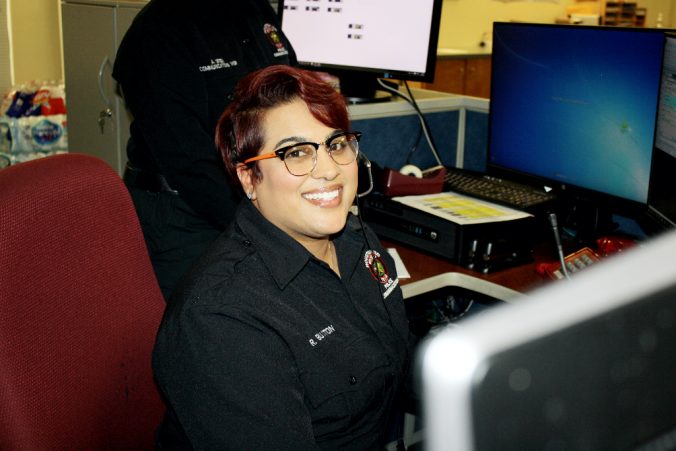 Sitting behind four large computer screens with a headset attached to her left ear, Raycinda Buxton spends her days responding to other people’s emergencies.

On any given day, the HISD Police Department dispatcher is answering 911 calls, dispatching officers, monitoring alarms and video surveillance — often all at the same time.

“Sometimes it can be a bit hectic. Some days are not as busy,” Buxton said. “Other days, well — quick feet, a lucid mind, and prompt actions are key.”

Buxton is one of a dozen HISD police dispatchers that provide emergency support 24-hours-a-day, seven-days-a-week. The dedicated team is being feted this week as the district celebrates National Public Safety Telecommunicators Week.

Held annually during the second week of April, National Public Safety Telecommunicators Week aims to recognize telecommunications personnel in the public safety community for their service and commitment to the profession.

“Dispatch is basically like the heart of any police department,” said Buxton, who is responsible for training her 11 fellow dispatchers. “Without us, there would be so much that couldn’t go on. We are the main focal point as far as communication goes when it comes to the officers and the police department. We keep the communication between the two.”

Buxton has more than 10 years’ experience serving as a telecommunicator and dispatcher — both in the U.S. Army and in law enforcement.

The Army veteran learned to keep her cool as she helped render life-saving aid to soldiers and the communities they were protecting. The Army, she said, taught her how to handle high levels of stress and multitask when emergencies arise.

“Sometimes you’re put into situations you are not necessarily prepared for,” Buxton said. “But you just must go with it, and know how to adapt and get what needs to be done, done.”

Buxton said she uses those same skills working for HISD Police. In the wake of Hurricane Harvey, she drove her vehicle through floodwaters to reach the HISD Police headquarters, where she stayed for 36 hours, providing assistance to people trapped in the hurricane’s high waters

“They needed us,” Buxton said.

The job of a police dispatcher can be daunting, said Police Dispatch Manager Ann Green, who oversees the team on which Buxton serves. The job comes with a lot of responsibility — and, sometimes, tragedy. Green said that can weigh on dispatchers.

But Buxton never lets that stop her from providing aid to those in need.

“As soon as you hang up the phone, there is another one that comes in. Sometimes we are counselors. Sometimes we are officers, first responders. Other times, we are parents for parents,” Buxton said, pausing to hook her headset back onto her ear and answer a ringing phone.

“I’m just here to provide a service. As long as I can do my job and make sure our officers get home safely, that’s my main goal.”