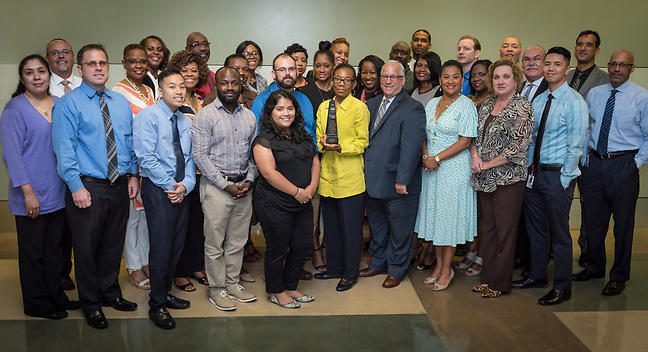 For the second year in a row, HISD’s Procurement Services Department has taken home top honors from The National Purchasing Institute.

Just last month, the NPI awarded HISD the Achievement of Excellence in Procurement Award, which is earned by organizations that have demonstrated excellence through an evaluation that measures innovation, professionalism, productivity, e-procurement, and leadership.  END_OF_DOCUMENT_TOKEN_TO_BE_REPLACED

The HISD supplier diversity team collaborated with the City of Houston, Port of Houston Authority, and the Metropolitan Transit Authority of Harris County to talk contracts with small businesses during May’s Workshop Wednesday hosted by the district’s business assistance office.

END_OF_DOCUMENT_TOKEN_TO_BE_REPLACED

More than 30 suppliers and vendors looking to do business with HISD learned how the district is improving its procurement process to create better opportunities for small businesses during a workshop held Tuesday.

“If we’re able to get the product we want, and you’re able to sell it, it’s a win-win for both of us,” said Gilberto Carles, the district’s general manger of procurement services. “If you’re not an awarded contractor, you need to understand why, so you can develop ways to take your company to the next level.”

END_OF_DOCUMENT_TOKEN_TO_BE_REPLACED

The Houston Independent School District is launching a new series of videos to help explain different aspects of the 2012 bond program that will renovate, replace or rebuild 40 schools across the city.

The short videos, designed for both web and TV, cover topics such as procurement and insurance on bond projects, as well as the benefits of building schools that are environmentally sustainable. The goal is to give viewers a quick snapshot into how the district is moving forward with its $1.89 billion building plan. END_OF_DOCUMENT_TOKEN_TO_BE_REPLACED

A third-party audit of the Houston Independent School District’s contracting practices has found HISD’s conflict-of-interest policies are more stringent than those used by most other school systems, although there are several potential areas for improving business practices.

The HISD Board of Education requested the audit as part of an ongoing effort to ensure that the district is making the best use of taxpayer dollars when deciding which businesses will be awarded contracts with HISD. The findings were presented to the board during an open meeting today by Charles Yaple, a partner with Null-Lairson Certified Public Accountants. The firm conducted its audit by reviewing district purchasing records, and by interviewing HISD staff members, former superintendents, and all nine elected board members.

“Following your existing policies should work very well for you,” Yaple told board members. “We’re recommending that you continue your procurement improvement initiatives.”
Those initiatives, which began in fall 2011, are aimed at addressing problems with HISD’s procurement process to ensure greater transparency and consistency for the public and those who are seeking to do business with HISD.

The auditing firm also said HISD should:
• expand annual board training on existing conflict of interest and related procurement policies affecting board members.
• simplify policies, including internal staff policies related to monitoring board activities and activities of procurement evaluation staff.
• involve the Procurement Department in all purchases in some manner, even those that are being handled in other functional areas.
• require board members to communicate benefits that might be received from existing vendors to the superintendent and evaluate exposing these services to market competition

Melinda Garrett, HISD’s chief financial officer, said work is already under way to improve the way HISD documents its contract-awarding process. Those changes include giving advance notification to those bidding on HISD contracts of exactly how their bids will be evaluated.
Garrett today introduced school board trustees to HISD’s newly hired procurement manager, Christopher Gross. Gross, whose first day on the job is April 2, most recently worked as contract manager for the University of Texas System Supply Chain Alliance.
HISD staff will now take these audit findings, along with the findings of a recent review of HISD’s purchasing practices conducted by the Council of the Great City Schools, and develop more plans for improving the process. Those plans will be presented to the Board of Education for feedback.