With more than 7,000 employees, Business Operations is the largest division in HISD. But what exactly do we do?

Before students can ever file into their classrooms, bus drivers and crossing guards must get them safely to school. Cafeteria workers must make them a nutritious breakfast. Custodians, police officers, and construction crews must make sure they have new, clean, safe spaces in which to learn.

The breadth of our work touches all facets of the district, and support is at the heart of everything we do. We help lay the foundation for student success — most of the time behind the scenes.

END_OF_DOCUMENT_TOKEN_TO_BE_REPLACED 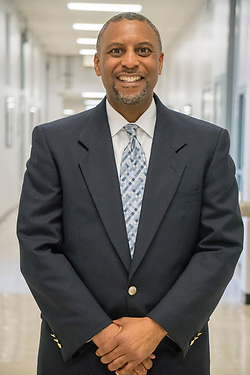 Andreas Peeples was in grade school when he first became fascinated with the idea of building things.

At just 8, he often found himself staring at walls, trying to figure out how they stood up by themselves and what they were made of.

“I would go behind the door and poke little holes in the wall to see what was in there,” Peeples said.

Now, the general manager for HISD’s Construction Services is responsible for building them.

With a bachelor’s degree in construction and engineering and a masters in management, Peeples oversees school construction across the district, including the voter-approved 2012 Bond Program, which calls for the renovation or rebuilding of 40 schools. END_OF_DOCUMENT_TOKEN_TO_BE_REPLACED

The HISD Business Assistance Supplier Diversity team is holding an outreach session on Friday for minority- and women-owned business enterprises (M/WBE) interested in working as subcontractors on the projects to rebuild four schools damaged by Hurricane Harvey.

Last week, the HISD Board of Education selected Satterfield & Pontikes Construction as the Construction Manager at Risk (CMAR) tasked with overseeing the demolition and construction of the four elementary schools – Kolter, Mitchell, Braeburn, and Scarborough. END_OF_DOCUMENT_TOKEN_TO_BE_REPLACED

The Houston Independent School District Board of Education last week approved a $12 million construction contract to renovate Codwell Elementary School on the district’s south side so that it could re-open for students.

The building at 5225 Tavenor Lane has been closed and vacant since the summer of 2014 when renovation work being done as part of the 2007 bond program uncovered significant moisture problems that required the students to relocate.

END_OF_DOCUMENT_TOKEN_TO_BE_REPLACED

The Houston Independent School District is launching a new series of videos to help explain different aspects of the 2012 bond program that will renovate, replace or rebuild 40 schools across the city.

The short videos, designed for both web and TV, cover topics such as procurement and insurance on bond projects, as well as the benefits of building schools that are environmentally sustainable. The goal is to give viewers a quick snapshot into how the district is moving forward with its $1.89 billion building plan. END_OF_DOCUMENT_TOKEN_TO_BE_REPLACED

The Houston Independent School District today announced the construction timeline for the 40 schools slated to be built or renovated under the voter-approved $1.89 billion 2012 bond program. END_OF_DOCUMENT_TOKEN_TO_BE_REPLACED

Who: The June 2012 edition of HISD Up Close hosted by HISD Board of Education President Michael Lunceford takes viewers on a hard-hat tour of the new Carnegie Vanguard High School campus. This summer, HISD Construction and Facility crews are finishing up the state-of-the art facility so students and staff can move in for the start of 2012-2013 school year. The show also features interviews with Carnegie Principal Ramos Moss and the HISD 2011-2012 Principals and Teachers of the Year.

When: Throughout the month of June at www.houstonisd.org and on HISD-TV (Comcast channel 18 and AT&T U-verse channel 99) on Wednesdays, Fridays and Sunday at 8:30 p.m.

Why: HISD Board President Michael Lunceford is committed to showcasing some of the amazing things happening at HISD schools across the district, in addition to highlighting district initiatives and accomplishments. His monthly show features a tour of an HISD school or project, and segments showcasing the academic accomplishments of HISD students and the dedication of HISD staff.

Peck Elementary, at 5001 Martin Luther King Jr. Blvd., is LEED certified, with a projected energy savings of 16.5 percent per year.

Dr. Grier thanked Peck Principal Carlotta Brown for her dedication and leadership, citing recent challenges with flooding during the weeks leading up to the ceremony. “She was supposed to be celebrating her anniversary, at dinner with her husband,” he said, “but she was here at Peck, making sure each student was safe.”

The new Peck campus, which was built with funds from the 2007 Bond Program, is considered a “high-performance” or “green” building, built to Leadership in Energy and Environmental Design (LEED) standards.

Key features in LEED schools include the installation of water-conserving plumbing, energy efficient systems and controls, improved air quality, and use of natural light. Peck, which will use 38 percent less water than a similarly built, less-energy-efficient elementary school, is projected to have an energy savings of 16.5 percent per year.