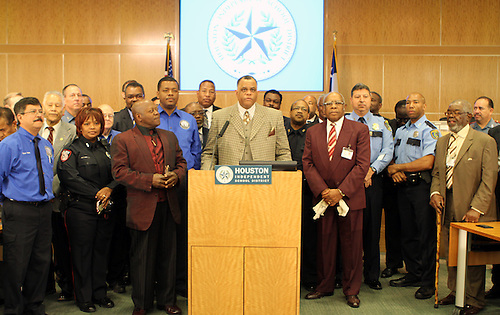 As students across the city enter their final days of the school year, they might see an increased community and law enforcement presence walking the halls.

For more than two decades, Project Safe Start has brought together local religious leaders, school district and area law enforcement, and school officials from districts throughout the area to help prevent crime and increase safety in an effort to get students’ summer vacation off on the right foot.

Their presence provides additional sets of eyes and ears, said HISD Police Lt. Richard Barrera, and allow the extra people on campus to make police aware of situations that may be bubbling.

“It’s been very successful. Where it hasn’t been (implemented), it should be modeled all over the country, because it really works for us” said HISD Asst. Chief of Police Robert Mock. “This is the epitome of community policing and cooperation where we have citizens and clergy and ministers involved in our schools, interacting with our students and staff and just bringing about calm and a peaceful atmosphere these last few days of school.”

Ministers stated the potential for more violence at the end of the school year as students decide to settle scores, but they also claimed a bit of victory, touting no arrests in the program’s last five years.

“We want to send a message to the parents as well that their kids are going to be safe. We want their support,” said Rev. James Nash of Ministers Against Crime. “All these people gathered here… are dedicated to making sure that the kids get out of school safely.”

Stories about students confiding in patrolling ministers were given as examples of the impact of community involvement, as ministers were able to either intervene directly or serve as a sounding board to help prevent crime or bad decisions.

“Children see you and you begin to develop a rapport,” said F.N. Williams II, vice president of Ministers Against Crime. “It’s involving, in a collaborative effort, all the entities that need to be involved. Certainly law enforcement is a piece, we see ourselves as a piece, but we’re talking about the children, the parents, all aspects of the community to keep those things in order.”