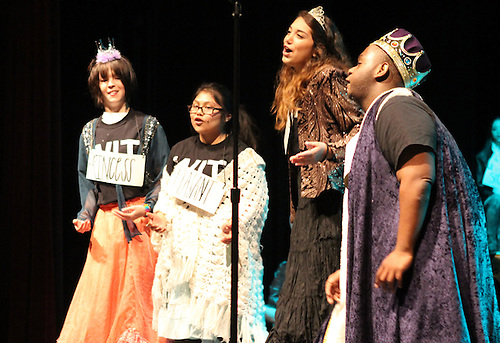 In Aesop’s Fable, “The Bundle of Sticks,” a man teaches the importance of unity and strength to his sons by having them each break individual sticks rather than failing to break a bundle of sticks.

On Tuesday morning at Westside High School, the students of the Westside Integrated Theatre displayed their own unity and collective strength on stage, performing their own interpretations of the tales credited to the ancient Greek storyteller.

WIT is a collaborative, inclusive theater group that pairs regular education theater students with special education students to work on a semester-long project, which culminates with a public performance. Tuesday’s play was performed to students and parents in a near-capacity Black Box theater on Westside’s campus.

For this spring production, the students wrote, produced and designed costumes for their portrayals, as well as wrote and choreographed original songs for the performance of “Aesop’s Idol,” based on the lessons of Aesop’s Fables.

“Each year gets more incredible and each show gets bigger and better; and more student-led, student-organized and student-run,” said theatre instructor Kate Kearns of the three-year program.

More than 50 students make up the popular WIT class, Kearns said, noting she has to turn away some students because of space and class size limitations.

As regular education students work with special education students, Kearns said the academic and social skills of the latter improve, while the former display more respect and friendship, even outside the theater setting.

Joan Graham, the parent of one student performer, said her daughter Jessie, who played the tortoise in a re-telling of “The Tortoise and the Hare,” has flourished since joining the WIT class three years ago.

“It’s really powerful. It goes to show that everybody can work together and it’s a great production,” she said. “She loves the theater. She loves performing and it kind of brings her out of her shell.”

As students took their final bow and exchanged hugs with family and friends, Kearns held back tears as parents and students thanked her for another successful semester.

“I get a hot mess nervous, but not because I think something’s going to go wrong,” she said. “But because I don’t want it to be over.”