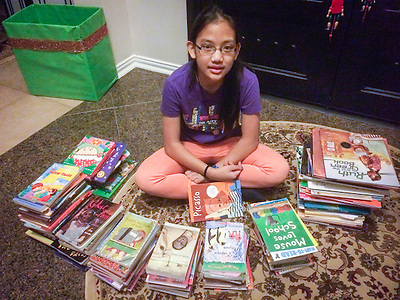 A T.H. Rogers student has collected books to help rebuild school libraries that were damaged in a massive fertilizer plant explosion in West, Texas, one year ago, on April 17, 2013.

Sixth-grader Camille Abaya is on Education in Action’s 2013-2014 Lone Star Youth Council, which has 27 members across the state. The group came up with ways to collect books in their areas, and Camille asked members of three different clubs to participate. She gathered a total of 114 books.

“I wanted the title of my project to be inspiring, so my motto during this project was ‘Why just be Houston ISD when you could be Help ISD,’” Camille said.

When donations collected by all 27 members of the council were counted, they had about 6,500 books. The books, which will help replenish the fourth- and fifth-grade sections at the elementary school and the fiction sections at the junior and senior high schools, were delivered to West ISD on April 9.