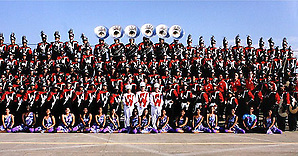 It’s not every day that a judge at a music competition reaches out to a high school principal to offer praise for his or her students’ performance, but that’s exactly what happened to Andria Schur after a group of her students from Waltrip High School returned from the Dixie Classic Festival held last month in Atlanta.

Schur received a highly complimentary email from Robert Ambrose, the director of bands at Georgia State University, after he served as an adjudicator and clinician for the Waltrip High School Concert Band.

“Their performance was simply spectacular,” wrote Ambrose, “musically mature, nuanced, subtle, and gorgeous. It was an absolute pleasure to hear them perform. They had a focused energy that I rarely see in musicians of their age.

“I was so taken by them in their clinic,” added Ambrose, “so blown away by their directors and by them as people, that I felt compelled to e-mail you immediately. I have adjudicated music festivals and given clinics to young musicians for over 20 years. The Waltrip students were among the most musically sophisticated, focused, disciplined, hard working, and polite I have ever experienced.”

Ambrose also offered praise to Jesse Espinosa, the school’s band director. “These students and Mr. Espinosa had a strong effect on me,” wrote Ambrose. “The energy in the room while I worked with them was electric. That energy came from them as students and from Mr. Espinosa. I left the clinic inspired by them as musicians and people. I was absolutely enthralled. I hope that I have the opportunity to work with them again.”